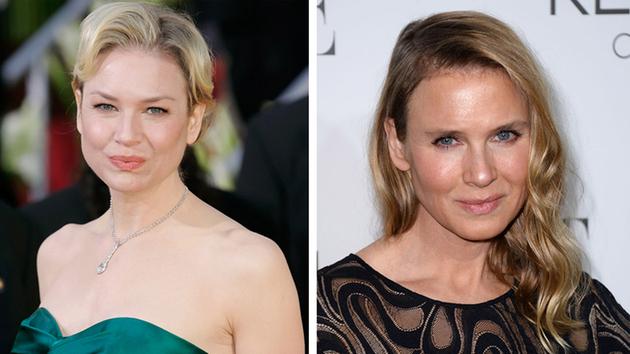 Renee Zellweger debuted her new face at Elle’s 21st Annual Women in Hollywood Awards last night.  My Facebook wall is covered in her picture and comments about her and her “new” face.  At first I was shocked but then I thought about it…if there was something on my body that I didn’t like, I would do something about it.

As an actress in Hollywood, Ms. Zellweger has had to change her appearance several times.  It is part of the job.  Gain weight, lose weight, blonde hair, short hair, long hair, dark hair.  Along with the job and it’s cosmetic demands, she has also been subject to a ton of criticism about her facial features.  There have been thousands of unkind articles, blog posts and tweets about her.  As you and I both know, this gets to you.  It doesn’t matter if you are a highly paid actress or a soccer mom.  Hear enough times that your eyes are squinty or your face is fat and it’s going to bring you down.

So what if it was you?  And your sagging booty?  What would you do?  If you were worn down enough, you might just do something about it.  You’d start eating better, you’d start working out harder.  You might try exercises to target the glute muscles to start lifting the saggy booty UP. Come the following summer, you might show up in a bikini to the big party on the beach and what will people say?  They will say, “Wow!  You look amazing!” and you will soak it up.

But it’s not her booty…it’s her face.  And her self confidence has taken a hit.  And she got some plastic surgery to help remedy the issue that she had heard and read time and time and time again.  And what happens?  People are giving her heat about it.  Damned if she did and damned if she didn’t.  Sure, she shouldn’t listen to what people say, she should be comfortable in her own skin.  But you weren’t.  You wanted that higher booty.

What do I take away?  I learn the lesson of being kind.  Not only to others but to ourselves.  When I speak about myself, I should do so with kindness, love and respect.  Love myself first and then spread that love and kindness to others.  Build them up, not tear them down.  An actress, the lady working at the department store, the girl that lives on the corner…stop ripping each other apart.  It’s not easy.  I catch myself wanting to throw out a snarky comment and I stop.  I’m not fake and try to say something nice, I just say nothing at all.  Even at my age, I’m still learning lessons.