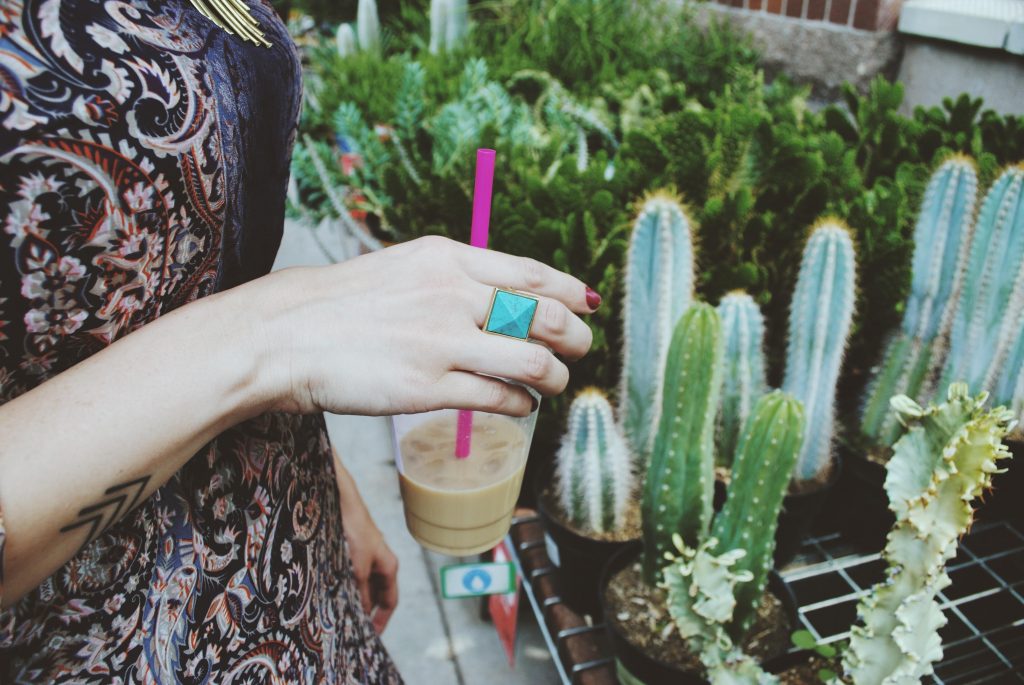 Do you have a coffee addiction???  When I first start working with women in The WOW Life Nutrition Program, coffee comes up pretty early in the conversation.  It seems like they covet coffee like their favorite childhood teddy bear.  I’m quick to tell them that coffee is okay and they exhale. I reached out to one of The Nutrition School alumni, Gillean Barkyoumb of Millenial Nutrition, for a deeper explanation of why this addiction might be good for you.  Gillean explains….

As I sit in the airport sipping my venti-iced-skinny-vanilla-latte, I’m reminded of a conversation I had recently with college girlfriends at Starbucks the week prior. “Sometimes I have two cups of coffee in one day,” one said with a tone of guilt and embarrassment. “I’m trying to switch to tea instead of coffee,” added another, going on to say she dislikes feeling “dependent” on the drug-like liquid. “I hate waking up feeling like I need coffee to function. If I don’t have time in the morning, I find a way to sneak out of work to get my fix.”  I chimed in saying proudly that I drink two cups of coffee daily, one on my way into work and the other after lunch. They looked at me—the never-eat-anything-unhealthy nutritionist—in shock. Wasn’t coffee a harmful beverage packed with addictive caffeine?

My theory: If coffee is your addiction, it’s a good one to have.
While excessive intake of caffeine can be harmful (as we’ve seen with teens chugging multiple caffeine-filled energy drinks usually accompanied with alcohol), a cup of coffee has on average 90 milligrams of caffeine. That’s a far cry from the 250 milligrams in some energy beverages.
Beat the brain drain
Caffeine has substantial scientific literature supporting its ability to improve cognitive performance including increased focus and alertness (1). It temporarily blocks the fatigue-inducing neurotansmitter, adenosine, in the brain so you can function optimally. Studies in everyone from athletes to nurses have shown caffeine can improve mental performance.
Caffeine has also been linked to improved memory. A recent study done at Johns Hopkins University found that caffeine enhances certain memories for at least up to 24 hours (2). But its brain health support isn’t just for short-term benefits. Studies also show better cognitive function in older adults who are regular coffee drinkers (3).
Fight free radicals
Coffee beans contain polyphenols—plant compounds that act as antioxidants to neutralize the damaging effects of free radicals, a result of exposure to factors like ultra-violet rays, poor diet, pollution, and cigarette smoke. Polyphenols help protect the body and may play a part in the prevention of chronic diseases such as cancer, heart disease, and diabetes.  While many foods and beverages provide polyphenols (including fruits, vegetables, red wine, and chocolate), coffee stands out as one of the richest sources with almost four times the antioxidant content of its greatest beverage competitor, tea (4).
Before you go running to the coffee shop down the street because a dietitian said coffee is good for you, it’s important to note that coffee loses it’s health benefits when it’s diluted with full-fat milk, doused with sugar-laden sweeteners, and topped with a generous dollop of whipped cream. Some drink concoctions on coffee shop menus can run upwards of 500 calories with 30 grams of sugar. This type of coffee addiction can cause damage in the form of an expanding waistline.
The bottom line: there are far worse concerns than a coffee addiction—such as realizing you subconsciously sipped your coffee drink dry while writing an article. Time to get another “fix” before my flight. Cheers.
References
1. Smith A. Effects of caffeine on human behavior. Food Chem Toxicol, 2002;40(9):1243-55.
2. Borota D, Murray E, Keceli G et al. Post-study caffeine administration enhances memory consolidation in humans. Nature Neuroscience, 2014;17:201-3.
3. Vercambre MN, Berr C, Ritchie K et al. Caffeine and cognitive decline in elderly women at high vascular risk. J Alzheimers Dis, 2013;35(2):413-21.
4. Perez-Jimenez J, Nevey V, Vos F et al. Identification of the 100 richest dietary sources of polyphenols: an application of Phenol-Explorer Database. Eur J Clin Nutr, 2010;64(3):S112-120
Thanks, Gillean!!!!
MILLENNIAL NUTRITIONIST, Gillean Barkyoumb, MS, RD, is a talented speaker, writer, presenter, and media enthusiast based out of Gilbert, Arizona. Being a millennial herself, Gillean has a unique interest in investigating why her generation has a fascination with food and how that passion can be a driving force in changing the food environment of the world to be healthier and more eco-friendly. You can connect with her on Facebook or on Instagram @MillennialNutrition.
0